Tristin's at his dad's for a two-night visit.

This is not the first one. In fact, it is the second one. Last time, I went to see him after the first 24 hours... and he was so sad, he missed me so much, that I ended up taking him home with me for most of the afternoon.

I am at a loss, this evening. I had no plans, no friends to visit, no money to take myself out for a movie... I didn't much feel like being around people, and now, now I don't feel much like being alone. I know that this feeling of disconnectedness owes much to the fact that I haven't been away from Tristin much through his entire life. I know that, at this point, I really shouldn't be at such loose ends after only 12 hours without him - especially considering that I need to be getting back to work soon - but, there it is. I miss him so much. I miss being able to go to his room at this hour, and see his sleeping face, and hear him breathing, and rest my hand on his chest to feel his heartbeat. And I have, perhaps, 12 more hours before I can see him again.

On Being in a Rush!

N.B.: The following post will likely have several spelling and grammatical errors, as no actual editing or even proofreading will be taking place.

Item the first: I have a job interview. I'm very excited about this. It's an entry-level position, but it's wit an organization that has a lot of opportunity for advancement, and possibly I may even get to put some of my teaching skills to use.

Item the Second: My son can walk. And babbles non-stop, although he still doesn't seem to have any actual expressive language (which I am getting worried about). His father thinks we may need to get his hearing checked, but I'm pretty sure he's hearing just fine - he just isn't speaking.

Item the Third: After a few weeks of expected bumps and bruises, living with my parents is actually going pretty well. Which is a relief, for about a thousand reasons that aren't really appropriate to blog about.

Item the Fourth: I have now lost 24 lbs since beginning my Single Mum journey. I'm thinking that's probably about as far as it'll go without putting any actual effort in (by which I mean I'm not actively going to a gym or anything; my only exercise is chasing my son around; all weight-loss to date is solely the result of better eating choices, so please don't hate me). I'm going to have to figure out a way to actually work out.

Item the Fifth (and Final): In the five minutes that I've been writing this, my son has pulled all of the books from the bottom two shelves in the bookcase next to me. Gotta go!
Posted by Alannah at 7:50 AM No comments:

I've been reminded that I haven't updated in a really, really long time. I do have a reason for this: I'm angry, sometimes so angry that I want to scream, shout, yell, and swear... and I don't want this to turn into one of "those" single-parent blogs. You know the ones I'm talking about. Full of vitriol and bile, and not actually sharing anything relevant about anything, just the same issues regurgitated over and over, not going anywhere.

So I took a little break.

A lot has happened since then. I've moved in with my parents (which really, deserves its own entry, so I'll try to remember to write that soon), am STILL looking for a job (and honestly considering emailing my former boss to see if I can have my old job back, despite passionately not wanting it), am making a conscientious effort to stay involved with my flesh-and-blood friends and not retreat into the pixel world completely, have lost almost 25 lbs (out of the 80 I needed to lose at the beginning of this), and am currently working on developing a schedule/routine that will continue to serve me once I've got my own place.

Tristin is doing well, despite constant small interruptions to his routine; regardless of what happens during the day, I'm striving to keep the hours from 8:30 PM (bedtime) to 7:30 AM (breakfast) pretty consistent. With a few small setbacks, it seems to be working; he seems more settled than he has in a few weeks, and although still exhibiting some anxiety around strangers and a great deal more general crankiness and fussiness than was his wont just a couple of short months ago, he is much more himself than he was a couple of weeks ago during the worst of the uproar.

Other than that, I've been savouring these last few weeks before my return to work; I know that at any time I could, potentially, get a phone call that I simultaneously long for and dread - the one that sends me back to work. Tristin and I have been walking every day that the weather allows, and sometimes even when it's not... we've spent time at the Street Performers Festival, and several parks, and the same Rec Centre pool where he had his birthday party. And we've just been taking each day as it comes, and basking in grace when and where we can find it.
Posted by Alannah at 7:52 AM 1 comment:

Labels: being single, one day at a time

On Taking Out the Trash.

I just finished massively cleaning out the house. Tristin's Dad had left a bit of a mess behind him, and I seized the opportunity to get rid of a whole bunch of junk that I've been hauling around with me through the last 4 or 5 moves.

Stuff is overrated. It's the measure by which our consumer-driven society measures success. It's an anchor; it weighs us down; and I hate it. I don't like having to sort through endless mountains of crap. I don't like packing, and contrary to popular opinion I don't particularly like cleaning - I just do it because the alternative is pretty disgusting, when you think about it. So, having divested myself of the vast majority of my library, about 2/3 of my "wardrobe" (most of which I would probably never have fit into again), every single piece of clothing that Tristin has outgrown (except the outfit he came home from the hospital in; I did allow myself that much nostalgia) and a mountain of junk and trash that had been accumulating in the basement/garage, I feel refreshed and ready to move on.

I definitely think this was a great idea.
Posted by Alannah at 4:00 PM No comments:

There are a lot of things I need to adjust to now. The first is the realization that my son will be an only child, something I never thought I'd say. I always wanted a huge family - 4, 5, even 6 kids - and that future is no longer a possibility; that path is barred to me. And yes, I'm the one who said the words that took it away - but really, it had been gone for months, if not years, already.

The second is the soul-crushing loneliness of being a single parent to an infant. (And yes, at 13 months he is still an infant; if you disagree, you have no children.) And again, I can hear you say "Boo-hoo, you ended it, now you have to pay for it!" Well, yes. But that doesn't make it suck any less.

The question is, would I change my mind? No. For reasons which will not be explained here, I believe that it was the right decision. And certainly the other involved party doesn't appear to be remotely upset, so obviously I was right in my estimation that it had been over for months, and had just become an exercise in stubborness.

But again, that doesn't make it suck any less.
Posted by Alannah at 10:11 PM 4 comments:

Labels: being single, mum vs. dad

On Job Interviews, Among Other Things.

I have a job interview tomorrow. The position isn't bad (I didn't apply for any bad positions this time 'round), although it's a far cry from what I would describe as a dream job. Still, it's a professional position, it's a Monday-Friday 9-5 sort of position, and it's in the right area of the city. Honestly, it's the kind of job I could probably do with my eyes closed; it's an office manager/receptionist position with a chiropractic office. So I'll have to file, answer phones, use the computer, keep the lobby/waiting area clean, tidy, and well-stocked with reading materials... and so on and so forth. Pretty mindless work, but on the plus side, one can assume that anybody leaving a chiropractor's office feels better than they did when they got there, so I'd be a part of making people's days better. And while it's not quite my dream job, it's a chance to add "Medical Administrative Assistant" to my resume, which could feasibly open even more doors. So wish me luck out there!
Posted by Alannah at 10:14 PM No comments:

On Being a Single Mum

Well, I figured I'd give it a week before writing this post. Didn't want to write from a place of anger, since doing that in a public forum doesn't really do anybody any favours... especially not when the possibility of a full-blown custody battle still looms. It doesn't look as though it will come down to that, though; we've both gotten a great deal more civilized as time has marched on from d-day. But yes, I am now a single mum. It's been a very long time coming to this point; I don't think either of us are really surprised (at least, I most certainly wasn't, and if he was, then he's even less observant than most men), but it's still going to be a long adjustment period. Not least because I have nowhere to live at present; I will be staying with various and assorted friends and family over the course of the next few months as I attempt to secure employment and rebuild my finances, but even if I were to land the perfect job tomorrow, and have childcare handed to me on a platter, it would still take literally 2-3 months before I'm in any kind of shape to strike out on my own again. But at least things are getting moving in the right direction; Once everything is said and done with, I think this will be the best move. Wish me luck!
Posted by Alannah at 6:39 AM 2 comments: 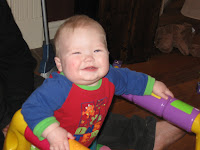 Come see us on Facebook! Just be sure to tell me in your friend request that you clicked over from my blog!

Words from the Past